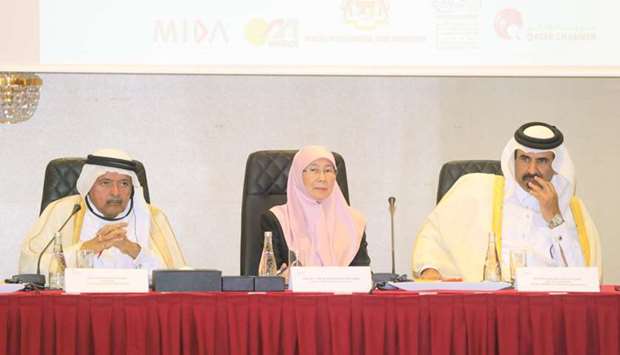 Malaysia, which is expanding its halal industry, wants Qatar to participate in investment opportunities in the Southeast Asian country’s food processing sector, according Deputy Prime Minister Dato’ Seri Dr Wan Azizah Wan Ismail.
Ismail made the announcement during a high-level meeting organised yesterday by the Qatari Businessmen Association (QBA) where she and her accompanying delegation met with QBA chairman HE Sheikh Fasial bin Qassim al-Thani and Qatar Chamber first vice chairman Mohamed bin Towar al-Kuwari, as well as other QBA officials and members.

Aside from food processing, Ismail also encouraged Qatar to participate in the Southeast Asian country’s projects in the tourism and hospitality, aerospace, agriculture, healthcare, and industrial and manufacturing sectors.

In her speech, the deputy prime minister affirmed Malaysia’s keenness to develop economic relations with Qatar, pointing to the multiple visits organised by business delegations from Malaysia to Doha in 2018.

On the Malaysian economy, Ismail said the country’s industrial sector contributes 36.8% of the national income with industries representing an important pillar to the Malaysian trade revenue, such as electronics and electrical appliances that represents 24.5% of the sector.
She also noted that Malaysia is widely known for its medical tourism sector and that most of hospitals that cater to medical tourists are private sector institutions that follow internationally-recognised standards in healthcare.

In his opening address, Sheikh Faisal spoke on the historical relations between Qatar and Malaysia, and lauded Malaysia for becoming an important investment destination with a strong and diversified economy and the fastest growing economy in South East Asia.
The QBA chairman also praised Malaysia’s robust Islamic banking sector, which ranks third globally, and as one of the largest Islamic banking sectors in the world.

Al-Kuwari also delivered a speech where he addressed the need to strengthen co-operation relations and study the investment opportunities between businessmen in both countries.

Responding the a query by QBA member, Dr Hussein al-Abdullah, a member of the Malaysian delegation said the country’s growth rate reached 5.8% in 2018, adding that indicators forecast an increase to exceed 6% next year.

On upcoming projects, the delegation said the Malaysian government prioritises industrial projects, such as food manufacturing, which accounts for 10% of the industrial sector, as well as the manufacturing of electronics and electrical appliances.