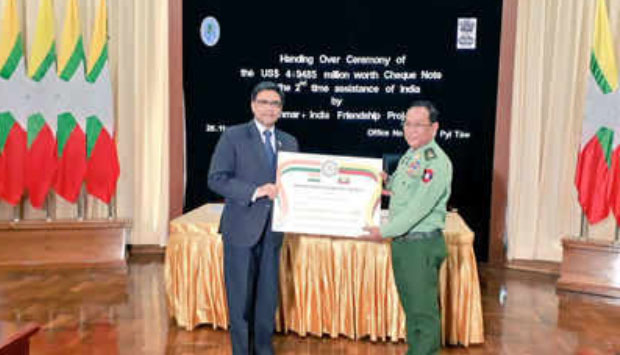 DHAKA: India has extended a $5 million aid to Myanmar as its assistance for development projects on the Indo-Myanmar border.

India’s Ambassador to Myanmar, Vikram Misri handed over a cheque of $5 million to Myanmar’s minister for border affairs, Lt General Ye Aung at a ceremony on Monday.

India and Myanmar signed a Memorandum of Understanding for border development in May 2012, under which India is to provide a total of $25 million to Myanmar, divided into five tranches of $5 million each.

Under the first year project plan, 21 schools, 17 health centres and eight bridges are being built in Chin State and Naga Self Administered Zone of Myanmar through Myanmar’s border affairs ministry, according the information available on the website of the Indian Embassy in Myanmar.

The Myanmar government is in the process of selecting contractors to execute the second year projects under which five road projects each would be completed in Chin and Naga Self-Administered Zone, it said.

Three schools would be also set in Chin state and eight in the Naga Self-Administered Zone, it added.